Home » Blog » What Happened to Artie Lange? The Dangers of Snorting Heroin

What Happened to Artie Lange? The Dangers of Snorting Heroin

Comedian Artie Lange recently made headlines with his social media pictures of his destroyed nose due to over 30 years of heroin, cocaine, and opioid abuse. Close to last Christmas, Lange posted pictures where he is almost unrecognizable from his many years on TV and radio.

Many comedians have flooded Artie’s social media page with pleas for him to stop using, and with his recent conviction for heroin possession and 4 years of strict probation, he promises he is doing his very best. The damage done to his physical appearance as well as his other health risks from drug use seem to have “finally caught up to him,” as he remarked in late 2018. At his recent hearing he confessed that he has to stop listening to that “bad voice” inside.

Artie Lange rose to fame in the mid-90s on the hit sketch comedy show MADtv. He later went on to co-host the Howard Stern Show for more than a decade and most recently had a recurring role in the HBO comedy series Crashing. Originally a longshoreman from New Jersey, Lange set out to make it as a comedian at age 23 as a cure for his depression. He found that comedy help him deal with his depressive mood, but once he discovered heroin, he began a destructive drug habit that has caused him many run-ins with the law and many health problems.

The most noticeable sign of Artie’s drug abuse is the damage it has done to his nose. Over 30 years of snorting cocaine and heroin have essentially destroyed his septum, causing his whole nose to deflate and flatten. He also recently confessed that he accidentally snorted broken glass thinking it was a crushed up oxycontin, which did significant damage.

The septum is structure made of bone and cartilage that separates the two cavities of the nose. The septum is firm, but bendable and should ideally be directly in the center of your nose, although about 80% of us have one that is a little off-center. When a septum is dramatically off-center is is called a deviated-septum. While this is a common septum problem, a more common way the septum is damaged is through the development of a hole. These septum holes range from: 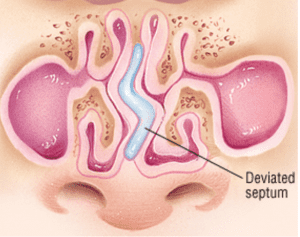 Symptoms from septum damage commonly include:

In Artie Lange’s case, he most likely has developed a large hole from years of heroin and cocaine abuse. The only solution in this case is plastic surgery, which he says he plans on getting in the near future.

Heroin is made from morphine, but its lipid-soluble molecular structure makes it a much more potent opioid. This structure makes it easier for it to cross the blood-brain-barrier and creates a fast and intense high. Users who snort heroin report a surge of euphoria within 10 to 15 minutes after taking it. This is followed by alternating states of wakefulness and sleepiness known as “the nod.” To combat the sleepiness, users will often snort cocaine and heroin together (known as “crisscrossing”), making them susceptible to the dangerous effects of both drugs.

A real danger is that heroin sold on the street might be cut with adulterants. These unknown chemical ingredients like fentanyl, added to heroin make it extremely dangerous and even deadly. Opioid overdose is still the leading cause of accidental death in the United States, with more that 13,000 deaths linked to heroin every year. There is also a danger of those addicted to prescription opioid drugs using heroin when they can no longer find prescription medication. As many as 94% of opioid pain medication patients said they used heroin because it was easier and cheaper to find, a recent study concluded.

When celebrities like Artie Lange show us the damages of drug use it can serve a wake up call. Even those who have wealth and fame struggle with addiction and depression and they can suffer the physical and mental damage caused by drug abuse. If you or a loved one are struggling with addiction, Rock Recovery Center in West Palm Beach, Florida can help with next steps. Call our 24-hour helpline or chat live with us now.