What is cotton fever and what causes it?

Home » Blog » What is cotton fever and what causes it?

By nature, recreational substance abuse is inherently dangerous for a number of reasons. Depending on the substance in question, the direct health effects of substance abuse can be quite profound, resulting in conditions such as undernourishment, emaciation, or even any of a variety of infectious diseases. Since the effects and risks resulting from substance abuse vary from one drug to the next, it follows that certain drugs will be more dangerous than others due to the severity of the effects that result from abusing that drug. For example, drugs that are consumed or administered via smoking or inhalation will put users at risk for a number of infections and illnesses that target the respiratory system. 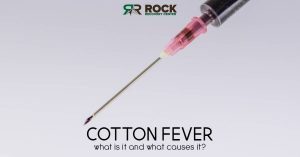 Risks associated with IV drug use

Of all the mind-altering substances to which individuals become addicted, those that are IV users could be said to pose the most risk to an individual’s health. Intravenous drug use offers the most direct method of administration with the substance’s euphoric effects being almost instantaneous since the substance is introduced straight into the bloodstream.

While this way of administration means the most rapid onset and strongest effects, this also puts users at risk of dangers that wouldn’t affect them if they chose alternative routes of administration, such as the risk of introducing toxins straight into the bloodstream. With drugs like heroin and cocaine (two substances that are commonly used intravenously) users can’t be certain of the purity level of any particular batch of the drug, meaning that when they inject the prepared drug into their bloodstream it could contain foreign compounds that could put one’s health or life at risk.

What is cotton fever?

Another condition of which individuals who intravenously abuse drugs like heroin and cocaine are at risk is called cotton fever. While being an incredibly dangerous and unpleasant illness, there are many misconceptions about cotton fever, including its actual causes. The following will define the illness commonly referred to as cotton fever and explain what makes cotton fever so dangerous to intravenous drug users.

The process of preparing a drug like heroin for intravenous administration is simple, often involving improvised or makeshift supplies and materials. Typically, the drug is prepared on a spoon, allowing individuals the ability to maneuver the solution so that they can heat it, filter it, and load it into a hypodermic syringe. One of the things required in order to complete the preparation of heroin or one of several other substances that can be similarly prepared for intravenous consumption is a piece of cotton to filter adulterants that aren’t water soluble out of the injection solution.

Addicts don’t typically invest in actual filters, several options of which can be purchased in a variety of places, but rather improvise using a piece of cotton torn off a Q-tip or from a cigarette filter. However, with a makeshift cotton filter or even a purchased filter it’s still possible for adulterants and debris in the drug to make their way into the syringe and, consequently, into the bloodstream.

A condition referred to as cotton fever has been experienced by addicts ever since the original spike in intravenous drug use that occurred in the 1970s. Since it tended to be a common of intravenous drug users, many addicts attributed the condition to be a result of their injecting drugs into their bloodstream. They tried to figure out in which part of the process the condition originated, and the conception became that some part of the preparation process had caused an infection and the trademark symptoms of cotton fever.

What are the symptoms of cotton fever?

Cotton fever can sometimes mimic the symptoms of heroin withdrawal. The core symptoms of cotton fever are a fever that would set in less than a half hour after the injection, as well as headaches, chills, nausea, general malaise or feelings of discomfort and unwellness, extreme joint and muscle pain, shortness of breath, severe back and kidney pains, anxiety, extreme shivering and tremors, and an elevated heart rate of 100 beats per minute or more when resting. Since these symptoms tended to come shortly after intravenous drug use when cotton was used to filter the drug solution, individuals assumed that the infection was caused by cotton getting into the syringe during filtration and, subsequently, into drug users bloodstreams, which is why the infection is named as such.

Over time, it was found that the purported cause of cotton fever being due to cotton in the bloodstream was not the catalyst for these individuals symptoms. According to medical research, cotton fever is the name given to infections that can occur one of two ways, but neither of them involve cotton finding its way into the victim’s bloodstream. Since similar symptoms were experienced by cotton farmers in the 1940s, it was discovered that what’s actually making these intravenous drug users sick is an endotoxin released by bacteria that colonize cotton plants, but which might remain in small amounts of cotton that’s been processed for consumer use. Typically harmless, this endotoxin only produces symptoms when it finds its way into users’ bloodstreams, causing the symptoms mentioned above.Another cause of the infection that is often referred to as cotton fever is a form of sepsis or an inflammatory blood infection that is caused by the unsanitary and unsafe practice of intravenous drug use. In particular, when hypodermic syringes which are intended for a single use, after which they should be properly disposed of continue to be used, bacteria and mold can grow inside the chamber in which the solution is loaded before injection into the bloodstream.

Individuals then inject the mold spores and bacteria into the bloodstream along with the drug solution they have prepared, causing the aforementioned symptoms that they believe are the result of cotton getting into the bloodstream. However, it was found that any intravenous drug users, including those who don’t use cotton to filter their drug solutions, are at risk of the types of infections that would often be identified as cotton fever among drug users.

Although incredibly unpleasant, cotton fever is not often life-threatened. Symptoms tend to subside on their own within 24 hours, though in cases where symptoms are intense it’s recommended that individuals may require an antibiotic to fight the infection, prescribed by a physician in a hospital emergency room. However, most individuals can manage the symptoms at home by drinking plenty of water, taking warm baths, taking anti-inflammatory medications like Tylenol or Advil, and try to relax as the infection works its way out of the body.

If you believe you are currently experiencing cotton fever, or are with someone who is, you may want to consider going to the emergency room. While cotton fever symptoms typically subside within hours, there is always a chance of contracting a bacterial infection that could potentially become dangerous. If you are seeking help for drug addiction, please contact Rock Recovery Center.