Depression and Addiction Treatment in Florida

Anyone can have a bad day. Sometimes it’s work matters, relationship problems, or issues at home. For most people, the low periods come and go in a reasonable, ordinary fashion and can be handled by engaging in things that make us happy. However, for people who suffer from depression and addiction, the low periods don’t go away easily.

But does depression cause addiction or vice versa? These two mental health conditions often present together, which can make it difficult to figure out which to treat first.

Clinical depression is a serious mental disability with severe consequences for the individual and their loved ones. The Centers for Disease Control and Prevention (CDC) estimates that 10% of Americans are struggling with this psychiatric disorder.

According to the CDC, these groups have the highest risk of depression:

Substance abuse is common to people who are battling a depressive disorder. Many depressed individuals turn to drugs or alcohol as a way to lift their moods or to numb painful thoughts. Due to this, depression and substance abuse feed into each other, and one condition will often make the other worse.

When a person has both depression and an addiction, it is called a dual diagnosis. It can be any combination of a mental disorder, such as depression, and a substance use disorder (SUD). In fact, more than 50% of people with a serious mental illness also have an addiction disorder. 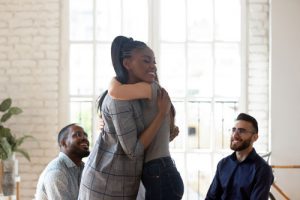 Depression, Addiction, and Denial. This is the DAD effect, and it’s a growing concern that most experts agree on. According to A.J. Marsden, PhD., assistant professor of psychology at Beacon College in Leesburg, FL, “Avoiding emotions, such as sadness, keeps us from processing what is going on. It keeps us from being able to accept and move past the event.” In other words, negative emotions, like sadness, can improve your judgment and motivation. People who process their sadness show greater perseverance.

But still, not everyone is able to deal with sadness and negative emotions. That is where the road to addiction can begin. Depression and addiction frequently go hand in hand, but finding out which came first isn’t always clear. In many instances, drugs or alcohol are turned to for relief from the mental pain of depression. At other times, depression develops as a result of the emotional and physical damage caused by the addiction.

Common in both substance abuse and mental health disorders is denial. It’s hard to admit how dependent you are on alcohol or drugs. It’s hard to realize how much they are affecting your life.

Likewise, the symptoms of a disorder such as depression can be frightening. Many people try to ignore them, hoping they will go away. They might be ashamed or afraid of being viewed as weak if they admit there is a problem. To make things worse, people who are depressed and handling it by abusing drugs or alcohol are more likely to be in danger of committing suicide.

What Happens First: Substance Abuse or the Mental Disorder?

Substance abuse and mental health problems like anxiety and depression are closely connected. Even though one doesn’t directly cause the other, abusing substances such as marijuana or methamphetamine can cause extended psychotic reactions. Alcohol can make depression and anxiety symptoms worse. Plus:

Signs and Symptoms of SUD

A substance abuse problem does not depend on which substance you use. It has to do with how your drug or alcohol use affects your life and relationships. If it’s causing problems in your life, you have a substance use problem.

Common Signs and Symptoms of Depression

Depression is one of the most common mental health disorders that co-occur with substance use disorder. Some common symptoms include:

Major symptoms of MDD are a lack of interest in things you used to enjoy and a sad or depressed mood. To be diagnosed with MDD, one or both must be present along with three or four of the others. And the symptoms must be severe enough to interfere with daily life.

Sometimes called dysthymia, this is a type of depression that lasts at least two years or longer. Symptoms may get better or worse but they must be present throughout that time.

SAD is a depressive disorder that begins during the winter months and eases in the spring. It may have to do with the amount of natural light available during the day. SAD has symptoms like social isolation, weight gain, and oversleeping. SAD comes back every year.

Perinatal depression occurs when a woman is pregnant. Depression that occurs after birth is called postpartum depression. This type of depression has the symptoms of MDD and the most common are anxiety, sadness, and fatigue. Sometimes the symptoms are serious enough to interfere with the mother’s ability to take care of her child.

Complications of Treating Depression and Addiction 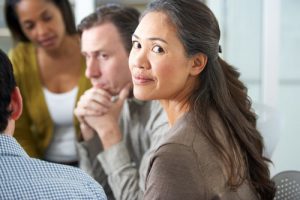 According to the Substance Abuse and Mental Health Services Administration (SAMHSA), an estimated 9 million adults have mental health and substance abuse problems. Unfortunately, only about 7% get treatment for both disorders. When addiction is combined with depression, these conditions tend to strengthen each other.

And if one is treated without the other, the chances for recovery become much less likely. According to Romas Buivydas, Ph.D., LHMC, Vice President of Clinical Development at Spectrum Health Systems, “When substance abuse is combined with depression, the risk of self-inflicted death grows exponentially.”

Another complication is that people struggling with addiction are usually not aware that they are also suffering from depression. Their addiction has completely taken over their lives. Even when there is treatment available, alcohol and drugs get in the way of mental health treatment. And depression is a leading predictor of relapse back to substance abuse.

Treatment is essential in managing depression. The most effective treatment depends on the type of depression and the factors that are unique to you as an individual.

Treatment for your depression may include:

Treatment with trained addiction specialists is vital to a successful recovery from substance abuse. It is not recommended to go “cold turkey” with no supervision.

Treatment for your substance abuse may include: 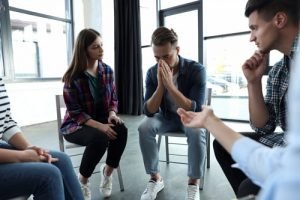 It can be a problem finding treatment for co-occurring mental and substance use disorders. Many programs that treat people with a mental disorder are not prepared to treat people with a substance abuse issue. And on the other hand, programs that treat addiction are not equipped to treat mental illness. People with dual diagnoses are often bounced from one program to another or are flat refused by single-diagnosis programs.

Nevertheless, if you have depression and an addiction, you need a substance abuse treatment facility that is prepared with a dual diagnosis treatment program. Rock Recovery Center in West Palm Beach, FL has a dedicated dual diagnosis program for the treatment of these co-occurring disorders. If you think you are struggling with substance abuse and don’t know why, or if you love someone who is struggling with these dual disorders, it’s important to make the first step and contact us. We know it’s a frightening situation, and we know how to help, but you must reach out to us first.